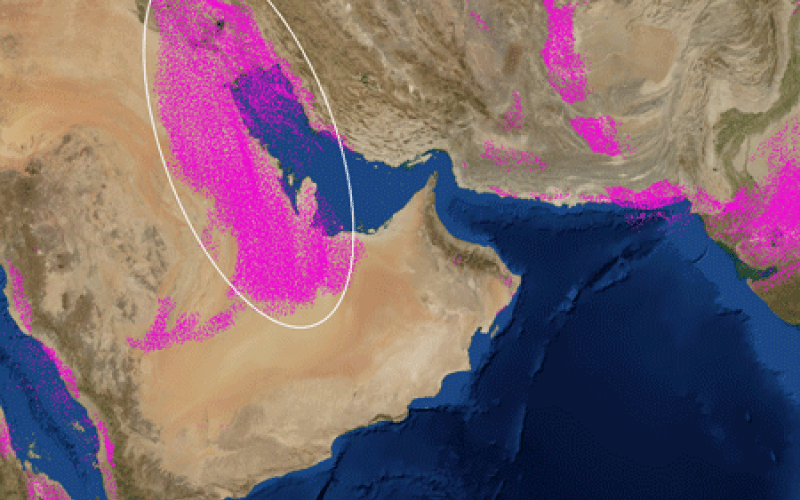 Unique System FZE, a Unique Maritime Group Company, which is one of the world’s leading integrated turnkey subsea and offshore solution providers, along with The Geodesy and Hydrographic Survey Section of Dubai Municipality established a Sandstorm Forecasting/Prediction system. This is launched at the Dubai Municipality’s stand (S2-B21) at the Gitex Technology Week, Exhibition held at The Dubai World Trade Centre from October 20th to October 24th, 2013.

The contract to build this system was given to Unique System FZE based on the superior understanding of the overall project and experienced staff.

While sand storms are of natural occurrence, they can pose a great problem for human societies living near the desert regions. For example Arabian Peninsula experiences more frequent sand storms as compared to the other regions.

After studying satellite imagery there have been identified areas in Iraq, Kuwait, Saudi Arabia as large sources of dust affecting the UAE. There are also source areas in Pakistan and locally in the UAE. The dust storms are driven by current meteorological situations, e.g. strong winds favoring their occurrence but recent rainfall acting against them.

The system will be based on the state of the art 3D weather prediction model with which Dubai Municipality has several years of experience and integrated with the model for sand source areas, transport by wind and settling.

It will be verified against geostationary and polar orbiting satellites, lidar and aerodrome reports.

First results of the Dust storm prediction system are very promising and indicate that system will help prepare public for dust storm events.

Eng. Mohammed Mahmoud Mashroom, the Director of Survey Department of Dubai Municipality commented on this occasion “We are very proud with the results of this project which is not only useful to our department but also to the whole nation and for the people living here”.

Earlier Dubai Municipality had only 5 coastal stations , then in 2010 +8 inland stations , 3-D weather model and 1D Fog Model were launched , then in 2012 satellite imagery and remote metrologist services were available and now in 2013 new buoys , new cameras , rain gauges and sandstorm monitoring systems will be available.

On this occasion Ian Huggins, General Manager @ Unique System FZE said “We are proud to be working with Dubai Municipality so closely on such innovative projects and being a part of this progressive set up for a safer and secure environment”.