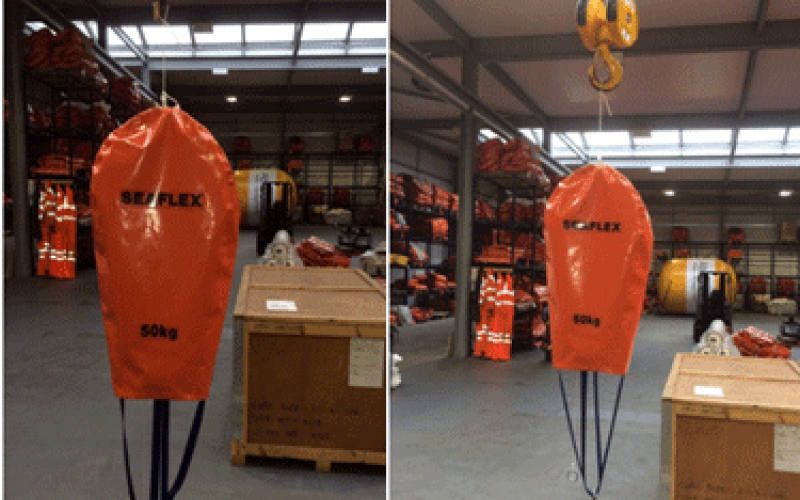 Unique Seaflex, a Unique Maritime Group company which is one of the world’s leading integrated turnkey subsea and offshore solution providers completes the manufacturing of its 30,000th Bag on the October 28th, 2013. Seaflex is a well-established manufacturer of heavy duty flexible structures. It designs, builds and maintains the internationally accepted, accredited and well proven range of air lift bags as well as a comprehensive range of water filled test weights.

It is one of the smallest bags in the selection of range of inflatable buoyancy that can be provided and this 50kg parachute-style air lift bag represents a significant milestone for UK buoyancy and ballast specialist Unique Seaflex.

Anticipated to be part of a significant requirement of air lift bags supplied on hire to a major offshore contractor for their North Sea operations, this bag carries the serial number 30,000 – which is a notable landmark in the 26-year history of the Isle of Wight based manufacturer.

Seaflex, was established as a small family owned business working from a modest facility by Mark Board back in 1987. At that time, bags of this size were the core business and the largest bag produced offered only 500kg of uplift.

In 2013, the largest bag produced at Seaflex’s purpose-built Cowes facility comes in at 50t -1000 times the capacity of this 50kg bag.

Since selling the company to Unique Mark Board, the founder of Seaflex has since retired. The now Managing Director of Unique Seaflex , Graham Brading commented “When I started out with the company 18 years ago we could hardly imagine the global success story that Seaflex would become today – and supplying the 30,000th bag is tribute to the hard work and dedication of everyone who has worked in the business over this time.”

“Seaflex owes a debt of honour to their many customers past and present, who have taken them to this notable milestone. With the business going through a period of significant worldwide growth, we expect Seaflex to be supplying their 60,000th bag into the market a whole lot sooner than the year 2039.” added Harry Gandhi, CEO of Unique Maritime Group.