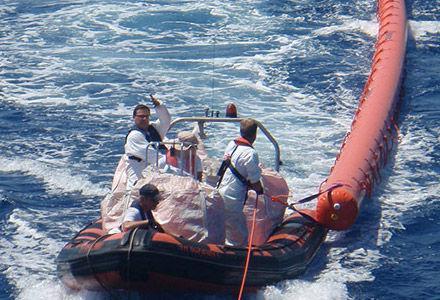 In late May 2015, Unique Group’s Seaflex team had all but completed the preliminary designs of what we now know as the CentiFloat. The buoyancy device had been made with commercial shipping companies in mind, designed to be easily deployed, towed at speed, and capable of saving the lives of 100 people or more.

Harrowing scenes of refugees perishing in the Mediterranean after their vessels capsized made clear to the team that the CentiFloat could, unfortunately, have a much more immediate purpose.

A prototype was built within three days and successfully tested by students at a local water sports and sailing centre.

How CentiFloat has been used in the Mediterranean

At the same time, the territorial restrictions within the Mediterranean were relaxed, allowing non-governmental organisations (NGOs) such as the Migrant Offshore Aid Station (MAOS) and Medecins Sans Frontieres (MSF, or Doctors Without Borders) to within 12 miles of the Libyan coast. This allowed the NGOs to intercept the overloaded refugee vessels, before they reached the shipping lanes 20 miles offshore.

Seaflex immediately contacted MOAS to donate two CentiFloat units for use on their next mission. In August 2015, the two trial CentiFloats were used in a real emergency and saved many lives.

Several other NGOs then made requests for CentiFloats to use in their own rescue operations, and Seaflex decided to focus on producing them in the swiftest possible timeframes for organisations such as MOAS, as part of Unique Group’s corporate social responsibility commitment – supported by donations from outside the organisation.

Seaflex has worked with its suppliers and employees to ensure a new supply of the flotation devices. Verseidag Indutex GmbH (www.verseidag.de) have donated enough heavy duty PVC-coated fabric to manufacture 18 new devices, while employees have donated their time at evenings and weekends to create the first batch. We have 10 devices built already on the back of these donations and time given up so far.

Seaflex has also been working over this time with UK emergency rescue and survival specialist MFC Survival to produce a platform version of the device for families. This will allow babies and infants to be safely placed on top of the float so keeping them out of the water, and out of harm’s way. The first of this new design is currently in production.

How to help
Ben Board, a site manager at Seaflex, was so moved by recent images of the refugees’ plight that he has resolved to raise funds to assist with the manufacture of more CentiFloats, as well as the purchase of other life-saving devices by established producers.

Unique Group’s employees, suppliers, friends and colleagues can help Ben continue to supply NGOs in the Mediterranean with life-saving devices by clicking here