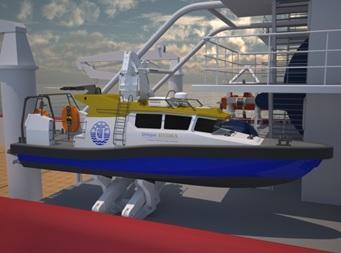 Unique HYDRA (UH), a division of the Unique Maritime Group (UMG) which is one of the world’s leading integrated turnkey subsea and offshore solution providers is proud to have received their second order this year, for its diving daughtercraft system called the HYDRACraft. Unique Hydra has spent the past twelve months engaging with clients to understand their diving daughtercraft operational and equipment requirements and developing a purpose built vessel which includes a fully integrated dive system.

Diving Daughtercraft systems are used in diving operations where the conventional diving DSV is not able to position itself close enough to an FPSO or Offshore Platform. The daughtercraft is fitted with surface supplied diving systems capable of supporting Nitrox and/or air diving operations and is assisted by an additional “support craft” that transfers personnel and supplies during the diving operations. The “mother vessel”, barge or platform is outfitted with davits for the daughtercraft and support craft as well as support equipment, including the decompression chamber, gas storage and compressors.

On this occasion, Mike Jessop, Managing Director @Unique Hydra commented, “We are extremely proud to receive our second order for the HYDRACraft. We are able to supply complete turnkey diving daughtercraft systems including the Diving and Support daughtercrafts, the Davits, decompression chamber facility and HP air and Nitrox generation equipment. Thus, our clients are ensured a purposed designed system with a turnkey scope of supply. We now look forward to a successful completion of the projects and achieving our on time delivery objectives.”

To know more about HYDRACraft or to place an order, please visit www.uniquegroup.com/Daughtercraft-Systems.