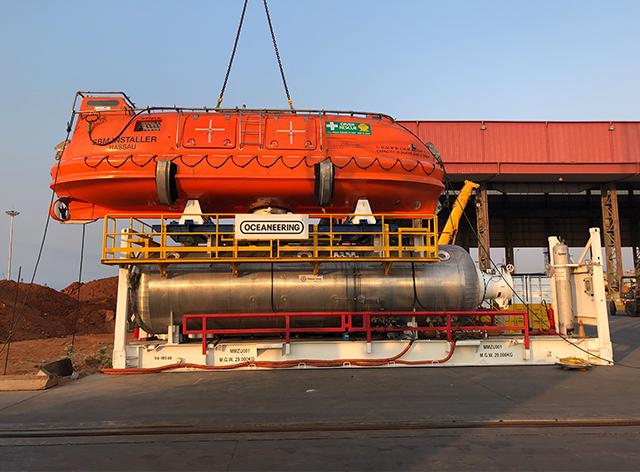 Headquartered in the United States in the city of Houston, Texas, Oceaneering is a global provider of engineered services and products to the offshore energy industry, with a focus on deepwater applications. Through the use of its applied technology expertise, Oceaneering also serves the defense, entertainment, and aerospace industries.

Oceaneering approached Unique Group’s Diving & Life Support division, based in Cape Town, in September 2018 for the rental of the HRF system.
The system will be deployed in Angola in support of the upcoming Saturation Diving operations on the diving support and construction vessel, the SBM Installer.

The scope of supply also included the manufacturing of a leveling table suitable for Unique Group’s Oceanwide branded Self-Propelled Hyperbaric Lifeboats (SPHL). Successive trials were conducted that involved the mating of the SPHL to the HRF system. Unique Group’s specialised technicians from Sharjah assisted with the setup and supported the SPHL mating trials at Oceaneering’s Angola office.

Unique Group’s Hydra and Oceanwide brands have manufactured and supplied several diving and life support equipment for global diving operations over the years. The HRF system with SPHL meets major safety standards, making it one of the most coveted HRF systems available in the market.

Ian Huggins, Unique Group’s Group Director for Diving Sales and Business Development, commented, “We’re extremely pleased to have worked with Oceaneering on this flagship project in the region. Diver safety is paramount to our operations, and with the successful completion of the mating trials, we’re confident that our HRF setup is poised to assist with safer diving operations in case of emergencies.
This is our first HRF delivery in the South-Central African region and we look forward to completing many more orders in the near future.”

Elhoussain EL Moutia, Oceaneering’s Director of International Projects, added, “We appreciate the level of professionalism Unique Group demonstrated during the course of the system delivery and SPHL fit tests, and look forward to working with the HRF system.”